Most of TIME's 100 most influential using social media

"Influence" is a funky mistress, as a recent Klout review of TIME magazine's top 100 most influential people reveals.

“We define influence as the ability to drive action, and we find that keeping up a steady cadence of quality content inspires people to stay engaged with you online,” said Lynn Fox, who wrote the rankings post for Klout's blog.

We suppose that Fox meant "the ability to drive online action," because that's all Klout can realistically measure. Yet, as Mashable rightly notes, just over half (53%) of the TIME 100 even had Klout scores (because they were participating in social media). Still, it is interesting that a majority of the world's most influential people are using social media. It is more interesting, still, that most of those influential people have Klout scores that are indicative of their overall influence, as Mashable notes:

A shift in what drives influence greatly impacted the movers-and-shakers who landed on this year’s list. Justin Bieber is the only person with a perfect 100 Klout score, perhaps thanks to his “beliebers.” Bieber made last year’s Time 100. Other high scorers are Rihanna (95), Lady Gaga (94) and Barack Obama (92) — all on this year’s list. Mashable’s own Pete Cashmore ranks high, too, with a Klout score of 89.

Of course, one would expect the likes of the President and Lady Gaga to have pervasive presences on social media, right? The chicken/egg question here is whether their presence on social media drove their present-day influence, or if they turned to social media out of some sort of perceived obligation to tap every available marketing channel. Klout's blog noted the following:

As TIME Editor Rick Stengel writes in his excellent opening letter, “Before microphones and television were invented, a leader had to stand in front of a crowd and bellow. Now she can tweet a phrase that reaches millions in a flash. Influence was never easier — or more ephemeral.” This is an important statement from a publication that issues the annual barometer of real-world influence.

Targeting matters - and not just geographically. Each social medium has its own community, culture, zeitgeist  and standards. Pairing the demographic data PolitiKlout gives you with known information about certain social media can help you better ensure that your content is being seen by the relevant voters you seek to reach.

To that point, Mashable shared a new infographic today that helps you understand the basic differences of some of the major social media. 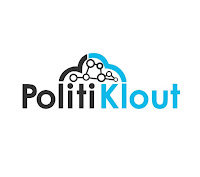 You might be thinking to yourself, "What's up with that funky PolitiKlout logo?"

Beats us! We just slapped a bunch of logos on the wall and blindly chucked a dart.

In all seriousness, discussing our iconography might seem to some folks an odd way to strike up a blog conversation - but we think it fits right in with our mission statement, branding and service offerings.

Ultimately, "PolitiKlout" - as a brand - is about targeted political outreach. While it's true that trust in online, social, and mobile advertising is growing, it's also true that word-of-mouth advertising is still the most effective type of advocacy.

"But what does that have to do with your logo?" you may be asking yourself.

The robot spittle that vaguely resembles a cloud is, in fact, meant to resemble a technological cloud. Don't worry, it's not as nebulous as it sounds. Just as "cloud computing" refers to an inherent and mobile interconnectivity, so too does our cloud-esk logo.

And to what does the "klout" in PolitiKlout refer?

You're no doubt familiar with Klout.com, which provides social media analytics to measure a user's influence across her or his social network. We're big fans - mostly of the idea of tapping social media influence. When 92 percent of consumers around the world say they trust earned media, such as recommendations from friends and family, above all other forms of advertising (an increase of 18 percent since 2007), you have to come to terms with the idea that tapping influential social media users has become a necessary element in any outreach campaign.

When you combine all of these branding elements together, what you have is a service that connects candidates with influential thought leaders - through traditional and social media - for targeted campaign advocacy.

Not bad for hurling a dart at the wall, huh?
Posted by seth at 7:47 PM