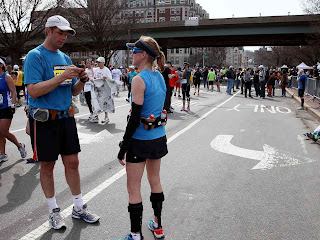 There's a lot of web chatter right now about the bad information which spread in the immediate aftermath of the tragedy at the Boston Marathon. And while it's important to understand how information spreads in an emergency - and how best to properly inform the citizenry, the finger-pointing and blaming of social dialog is ill-placed.

The real social media failure yesterday was that of the involved emergency response agencies.

The simple fact of the matter is that a lot of the initial clutter and bad information that went viral might have been mitigated had there been an immediate, pervasive and official social media response - particularly on Twitter.

Folks were understandably starving for information, and so they took it upon themselves to find and share what they could to fill the vacuum. The problem is, somehow, official reports were not in the mix of what these people found - at least not for a good while.

(Almost a full hour after the first bomb went off)

The wild speculation and third-person misreporting could have been circumvented had the involved emergency response agencies 1) successfully leveraged pre-existing online reach to effectively spread official information and 2) enacted an emergency communications plan to immediately and successfully inform the public. Of course, both these points presuppose that the response agencies involved both made the investment to build their social reach before this disaster and had an emergency communications plan in place which accounted for social media.

Given the wide-spread misinformation, I'm guessing... not so much.

If you were following Twitter, for example, during the immediate aftermath of the bombings, official emergency response social channels were not really present in the conversation. Even if they were active - and I don't think many of them were for some time - their content either wasn't maximized for visibility so that it could go viral and/or these agencies hadn't done their due diligence of building a solid base of community reach before this event in order to give their content enough raw visibility to make it go viral organically.

And so the ensuing vacuum was filled with bad information.

I suspect some folks will use the ex post facto hand-wringing and gnashing of teeth over the spread of this bad information as a means for minimizing social media's role in an emergency. I would urge you to accept quite the opposite.

This shows why - even during times of "peace" - effective and professional social media use is profoundly important. Official organizations and representatives cannot wait for an emergency to build a social audience. Reach must be established ahead of time, and trust and credibility have to be earned through steady, long-term online communications. Otherwise, when an emergency happens, you'll find yourself speaking to an empty room and hoping everyone can figure it out themselves.

As Boston showed us, this is not a successful strategy.

(Mass. National Guard makes its first  direct Twitter mention [to its 1.3k followers] of its involvement in the response effort - several hours after the attack... oh, and it's an auto-feed from their Facebook page)

And then, even if you have a decent-sized online following, your content must be optimized for visibility (a la the inclusion of relevant hashtags, @replies, etc.). And determining what the relevant hashtags are in an emergency takes both forethought (perhaps by building out a hashtag theme index ahead of time) and on-the-spot research to see what's trending. These are time and resource investments which must be dedicated before tragedy strikes.

The Massachusetts #NationalGuard has more than 460 Guard members on scene in support of the Boston Marathon.
— National Guard (@USNationalGuard) April 15, 2013

Either way and for whatever reason, the primary social media failure of yesterday's terrorist attacks belongs to the emergency response agencies which failed to get official information into the trending social conversation. As a result, a vacuum was created and consequently filled with disreputable information. To prevent this in the future, emergency response agencies and their communications staff will need to take more seriously both the construction and maintenance of their social channels during times of "peace," and their obligation to adequately include social response in their emergency communications plan.

UPDATE: I should mention that - by way of contrast - the JFK Library actually got this right - and put an early end to the misinformation circulating in their area of operation. Note the dramatically higher number of retweets and the time stamp. Kudos to them.

Investigators are investigating. Any tie to Boston Marathon explosions is pure speculation. More information as we receive it.
— JFK Library (@JFKLibrary) April 15, 2013